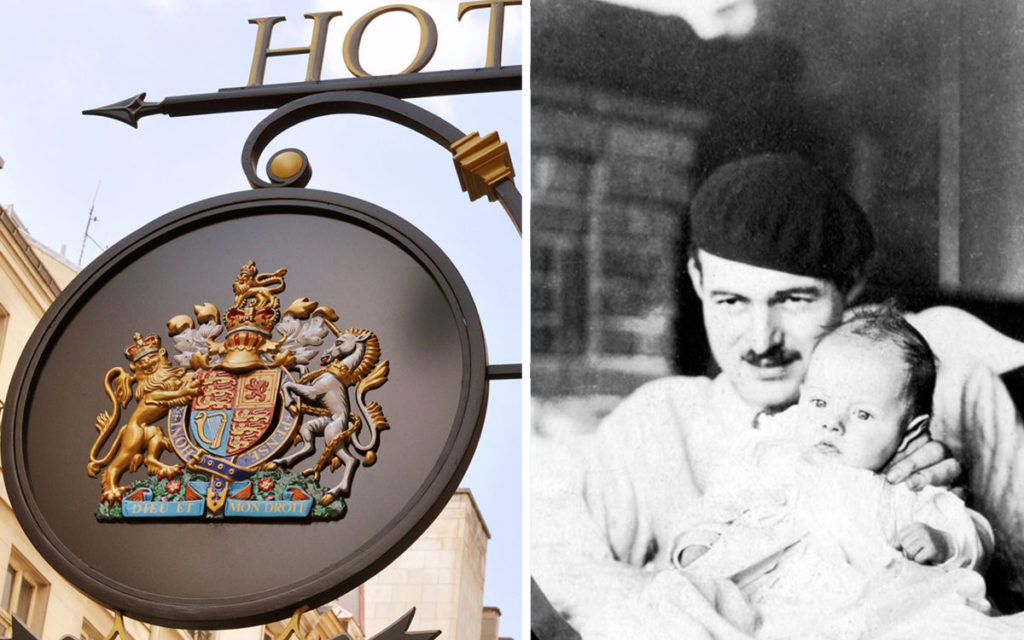 Where did Hemingway live in Paris?

In 1921, three weeks before Christmas, Hemingway and his first wife Hadley arrived in Paris and stayed in the Hotel d’Angleterre. It was recommended by the American writer, Sherwood Anderson, who also provided Hemingway with letters of introduction to Gertrude Stein, James Joyce, Ezra Pound and to the publisher Sylvia Beach. Hemingway wrote to Anderson: „Your letters of introduction were like launching a boat into water.”
See it on Map: 44, rue Jacob. 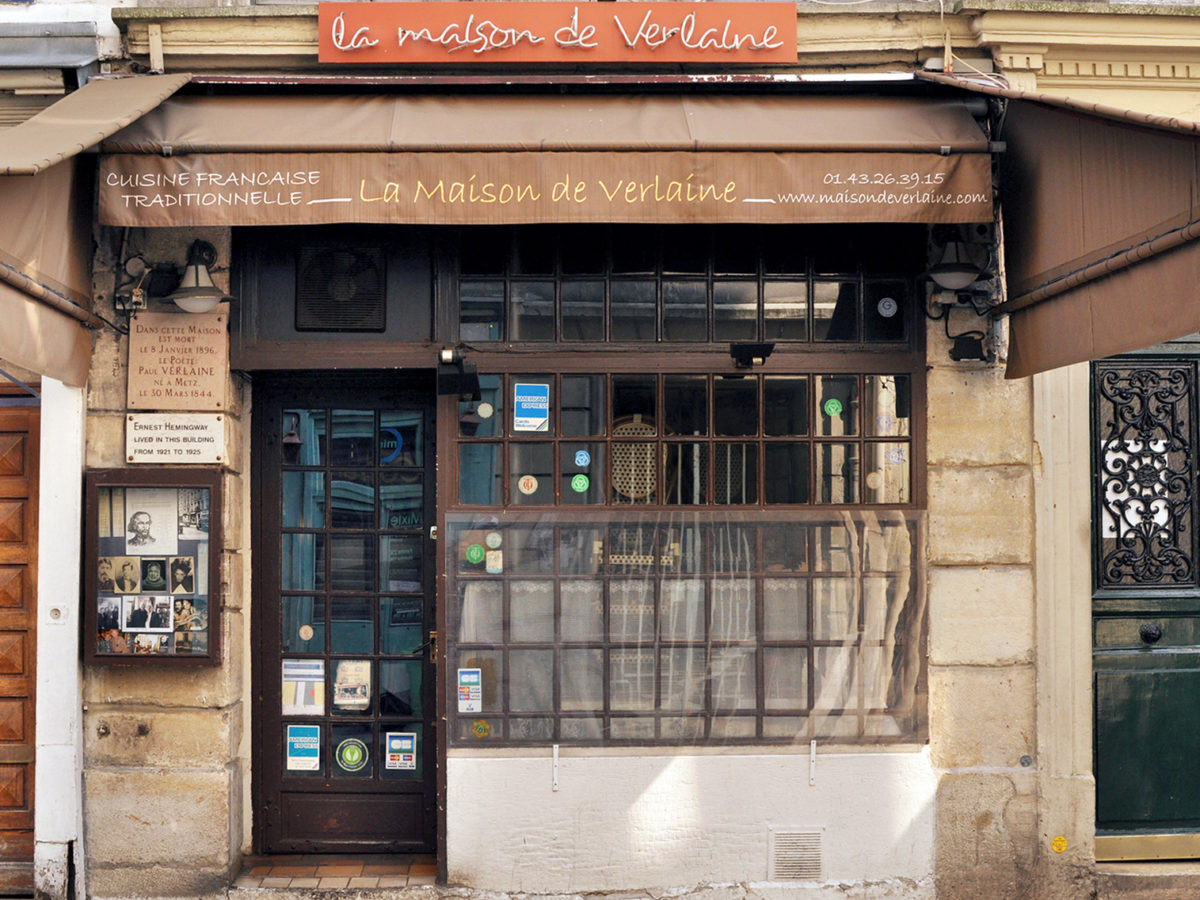 This four-story tenement house used to function as a hotel, where Hemingway rented a room in the attic. There was a small restaurant Chez Verlaine (today it is La Maison de Verlaine) on the ground floor and above the gate there was a plaque with the inscription: “On 6 January 1896, the poet Paul Verlaine died in this house. May he rest in peace.”

Hemingway’s studio was very modest. “I was always hungry with the walking and the cold and the working”, wrote the writer. “The fireplace drew well in the room and it was warm and pleasant to work. […] Up in the room I had a bottle of kirsch […] and I took a drink of kirsch when I would get toward the end of a story or toward the end of the day’s work. […] Up in that room I decided that I would write one story about each thing I knew about. I was trying to do this all the time I was writing, and it was good and severe discipline.”
See it on Map: 39, rue Descartes. 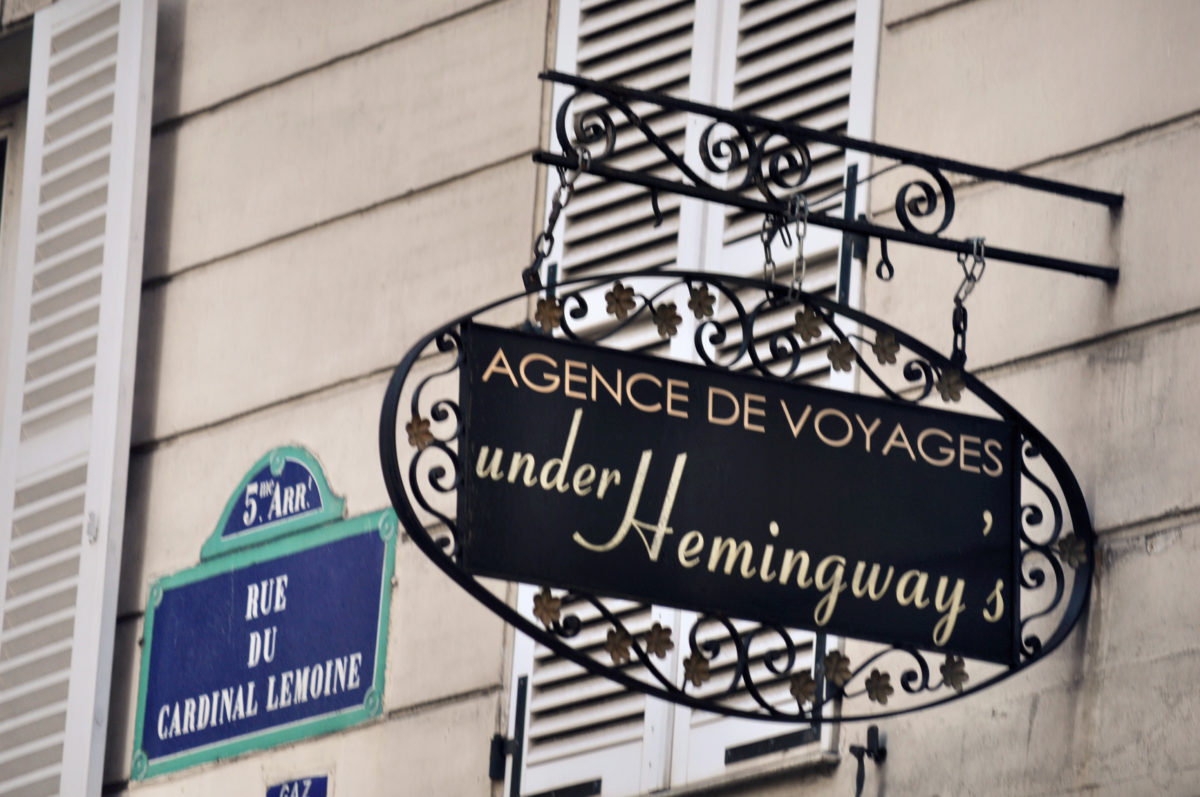 At the beginning of their stay in Paris (January 1922 – August 1923), Ernest and Hadley rented a two-room flat on the third floor (middle doors) at 74, rue Cardinal Lemoine. It had no hot water and no toilet facilities and the couple slept on a mattress on the floor. Hemingway described this place in The Snows of Kilimanjaro: “From the apartment you could only see the wood and coal man’s place. He sold wine too, bad wine. The golden horse’s head outside the Boucherie Chevaline where the carcasses hung yellow gold and red in the open window, and the green painted co-operative where they bought their wine; good wine and cheap.”
See it on Map: 74, rue Cardinal Lemoine. 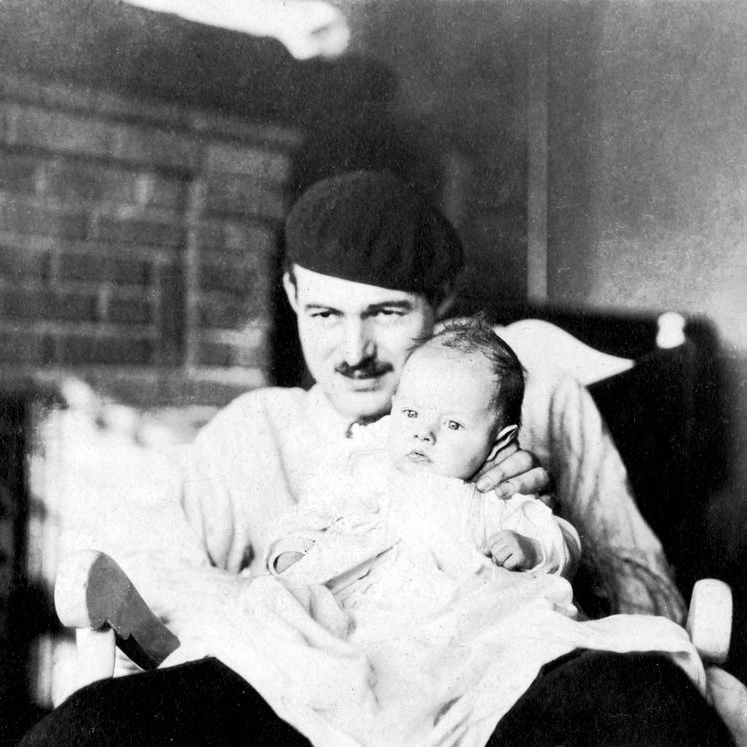 Hemingway with his son John at his second apartment in Paris. He rented it after his return to France in 1924. / Ernest Hemingway Photograph Collection. John F. Kennedy Presidential Library and Museum, Boston.”

At this address, Hemingway rented another apartment. It was not far from the Luxemburg Gardens, and the café La Closerie des Lilas, and the home of Gertrude Stein. Below the flat, there was a sawmill and the poet Ezra Pound’s studio. In the apartment was a long hallway, dark and narrow as a tunnel that led to a kitchen. A large table occupied almost the entire dining room and a bedroom functioned as a writer’s studio.

Hemingway had a cat named Pussy, which slept in the crib with his son, John, who was nicknamed Bumby. Early in the morning, the writer would start working in the company of his sleeping child and the cat.
The windows faced the sawmill and a wood storehouse, he described the scene like this: “and the sudden whine of the saw, the smell of sawdust and the chestnut tree over the roof with a mad woman downstairs.” Hemingway often worked at the café, chased out of his home by the howl of the buzz saw and the cacophony of noises coming from the machines outside.
See it on Map: 113, Notre-Dame-des-Champs. 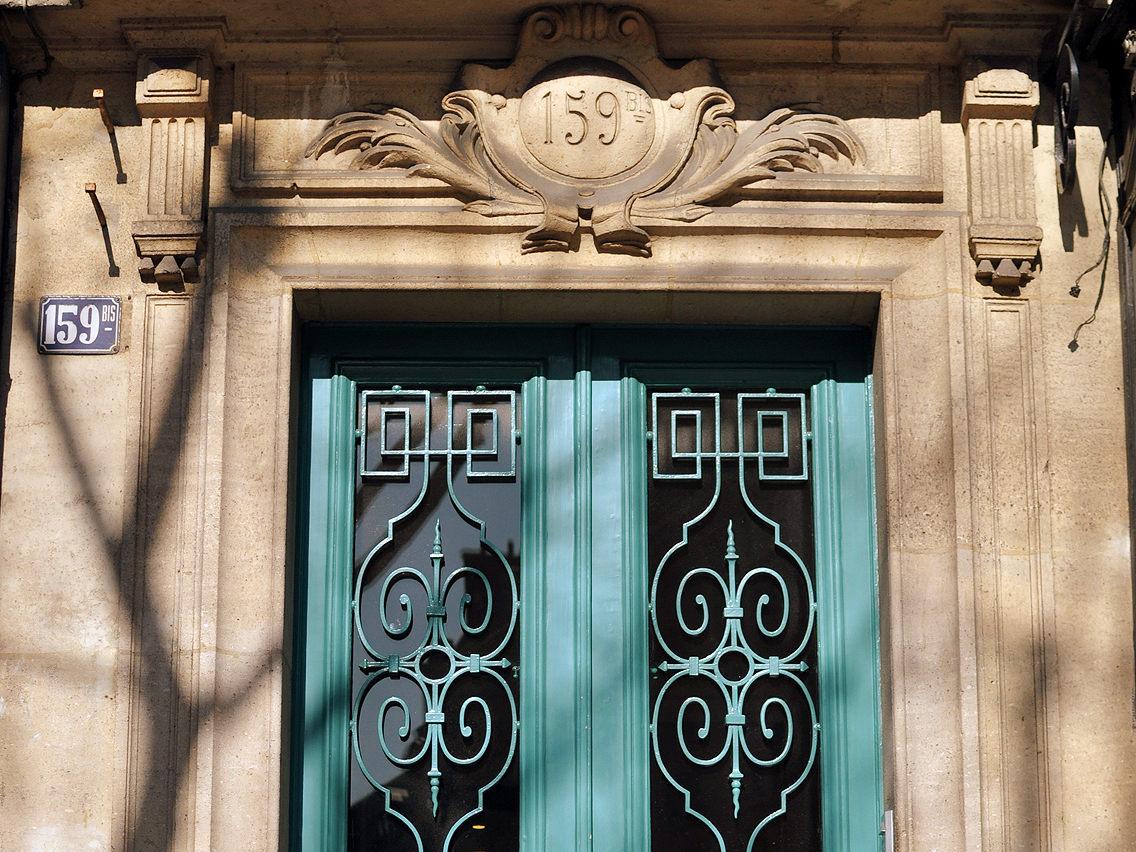 The Hotel Venitia used to stand here, in the place now occupied by a travel bookshop. In this hotel Hemingway spent nights with Pauline Pfeiffer, while his wife and son were waiting for him in Austria (Pauline became his second wife in 1927). Although Hemingway and Hadley remained friends after their divorce, he always felt guilty for leaving her.
See it on Map: 159, Boulevard du Montparnasse. 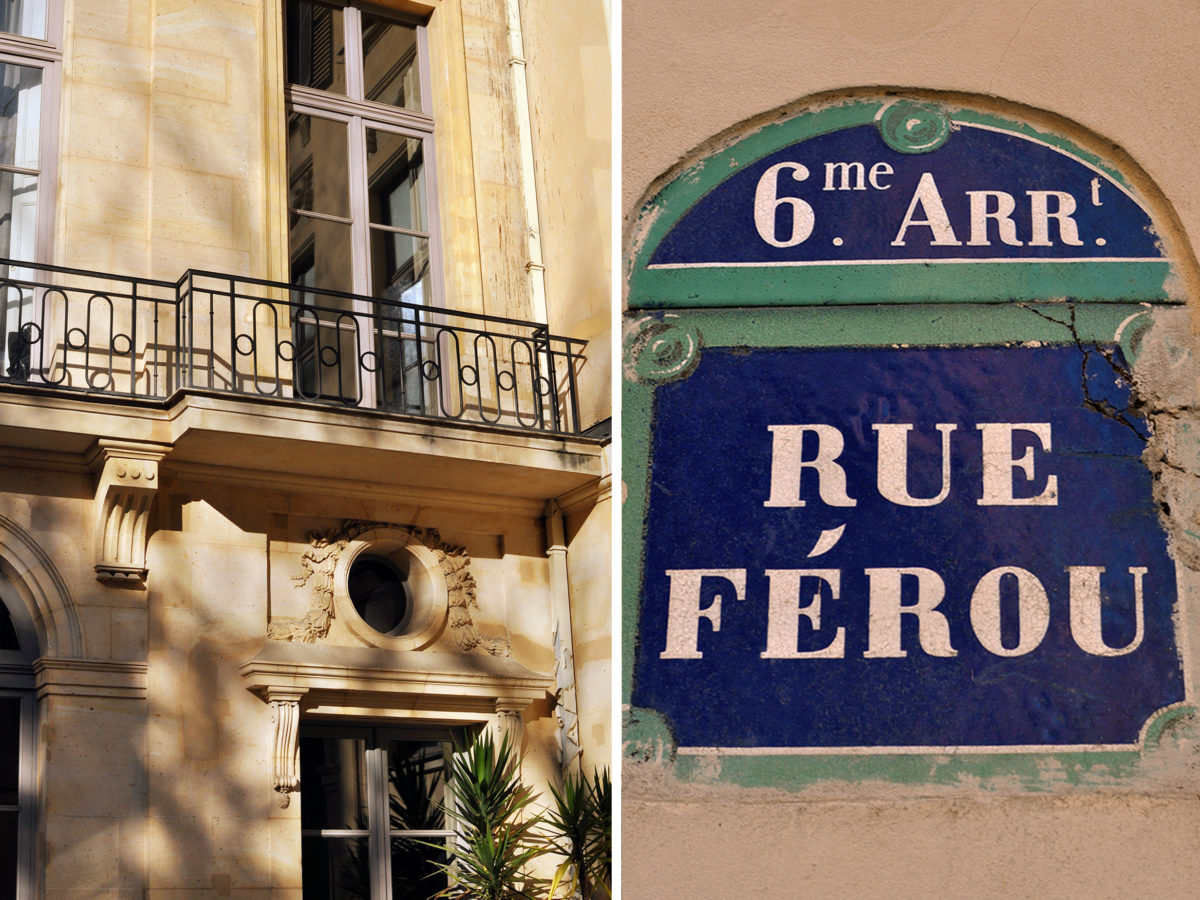 Hemingway lived here with Pauline Pfeiffer in 1926, after he left his first wife Hadley and his son John. The writer met Pfeiffer (the daughter of a wealthy businessman) during winter holidays with his family in Schruns, Austria, in 1925. The petite, elegant woman was a journalist working for American Vogue. When the Hemingway family returned to Paris, she paid them a visit in their apartment in Notre-Dame-des-Champs, above the sawmill. Although Pauline was not very fond of Hemingway at the beginning (she found him rather sloppy looking and unshaven), they forged a friendship. Later, the initial aversion turned into passionate love. In this apartment Hemingway worked on his novel A Farewell to Arms.
See it on Map: 6, rue Férou. 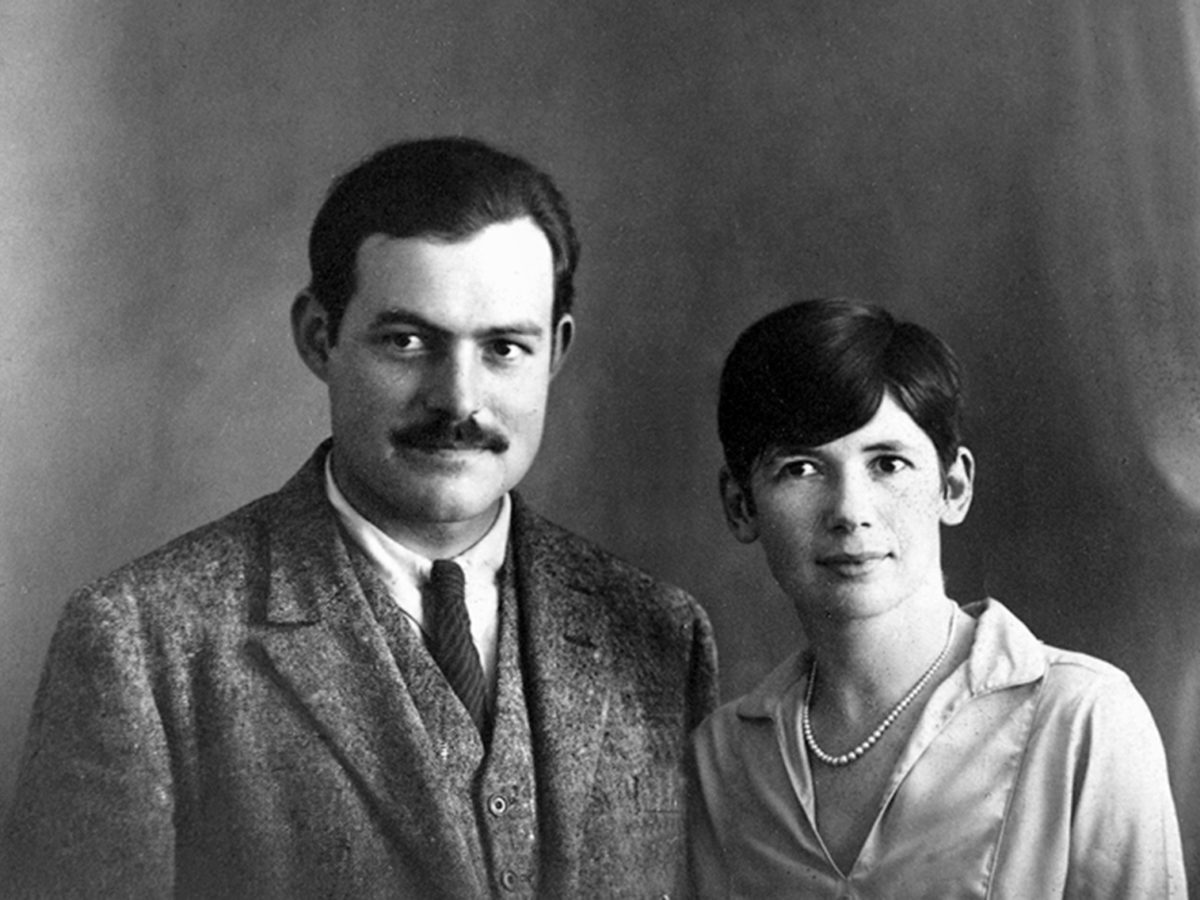 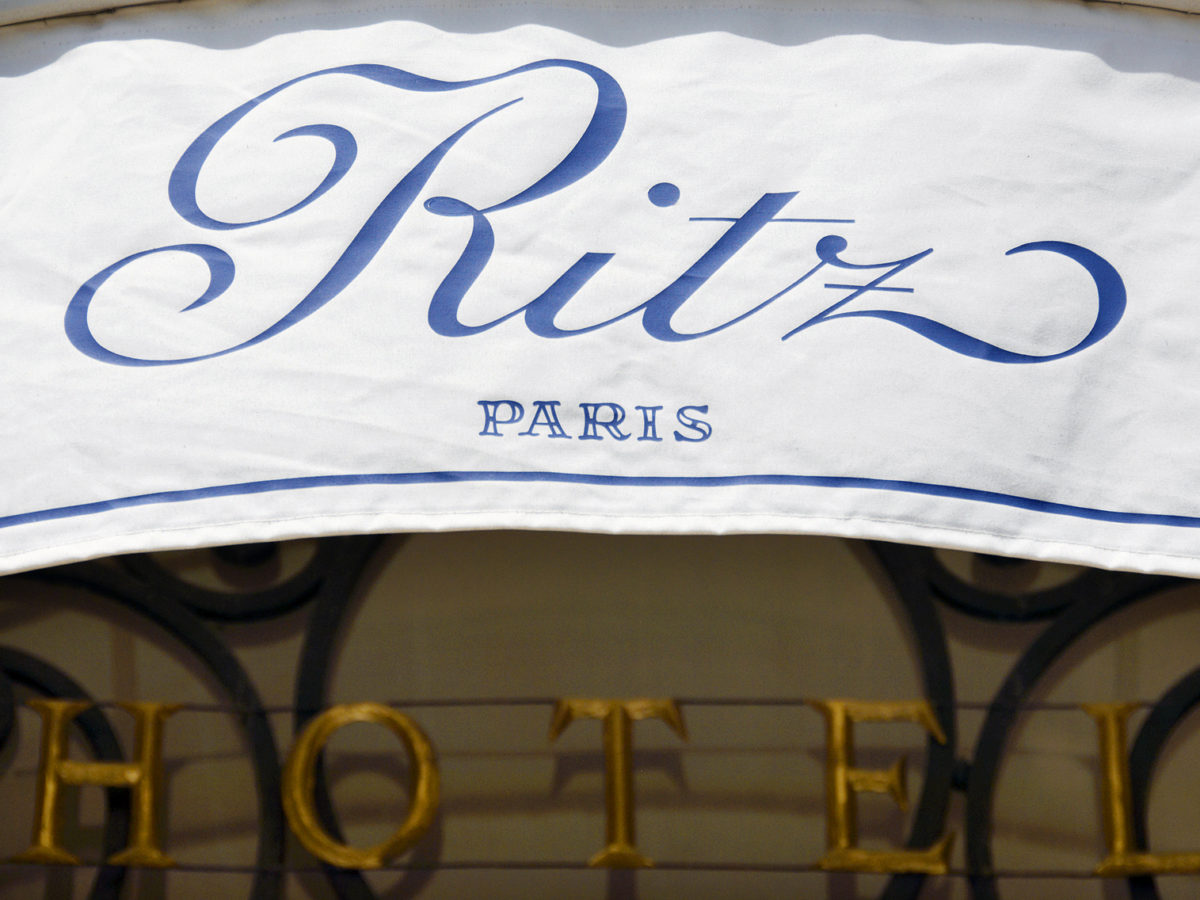 Hemingway often told the story that during the liberation of Paris in 1944, he was the first one to “liberate the Ritz” and its wine cellar. Legend has it that Hemingway, with a gun slung over his shoulder, arrived at the Place Vendôme in a jeep, proclaimed the liberation of the Ritz, took command of the bar, and ordered champagne or – according to other sources – 93 [73 according to other sources] dry martinis for himself and his battle worn comrades.

When Hemingway returned to Paris in 1956, he retrieved the luggage that he had left in the hotel checkroom thirty years before. Inside the two travelling trunks were manuscripts, rough drafts of his novel The Sun Also Rises*, books, press cuttings and old clothes. There were also notes on his first years in Paris from the 1920s that would later become the basis for A Moveable Feast*. In order to take his long lost belongings home to Cuba, Hemingway and his wife, Mary, ordered a large custom made travelling trunk from Louis Vuitton.

The actress Margaux Hemingway, Ernest’s granddaughter, had her wedding party in the hotel. César Ritz’s son Charles, an old friend of the Hemingways, was the bride’s witness.
See it on Map:  15, Place Vendôme.

The Sun Also Rises (1926). The novel is recognized as Hemingway’s first literary success. This biographically inspired roman à clef portraying the lives of American expatriates in Paris, was a salon sensation. The protagonist, (based on Hemingway himself) Jake Barnes, is a journalist, novice writer and First World War veteran, who drowns his sorrows in alcohol, first in Paris and then in Spanish Pampalona. The book portrays the lost generation: spiritual wrecks, made impotent from the experience of war, who search for meaning in boxing, bullfights, alcohol and sex.

A Moveable Feast (1964) Hemingway’s memoir about his years in Paris (1921-26). The book is full of the writer’s anecdotes, personal accounts, observations, and the atmosphere of 1920s Paris. Some of the famous figures featured in A Moveable Feast include: Francis Scott Fitzgerald, Ford Madox Ford, Ezra Pound, Gertrude Stein, Sylvia Beach and the author himself. The circumstances in which the book was written and published were quite unusual. When Hemingway returned to Paris in 1956, he stayed at his favorite place, the Ritz Hotel, where he retrieved the luggage that he had left in the hotel checkroom thirty years before. Inside the travelling trunks were, among other things, Hemingway’s notes from his first years in Paris in the 1920s. When he returned to Cuba in the fall of 1957, he began to work on a manuscript. During that period he was also working on The Dangerious Summer. It took him four years to shape the recovered work into his memoir A Moveable Feast. The book was published posthumously in 1964. 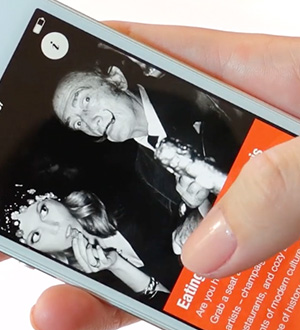 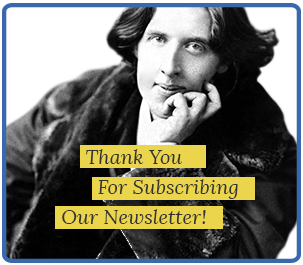