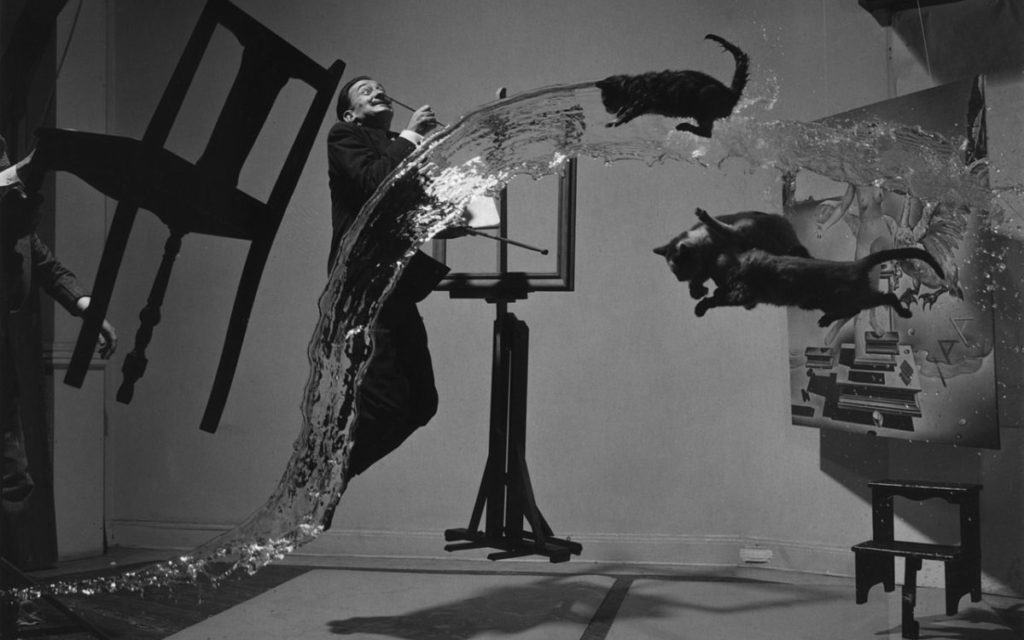 Dali Atomicus, the title of the photography refers to Leda Atomica, Salvador Dali painting on the right side of the image. Philippe Halsman / Public Domain

In 1926, Dalí arrived in Paris. Although he never settled in the city, he would frequently return here for the rest of his life, quickly becoming a part of Parisian elite.

Salvador Dalí is considered one of the most colorful personalities of the art world and one of the most brilliant and versatile artists of the 20th century. Fascinated by dreams and psychoanalysis, he looked at the world through the prism of surrealism. He could recognize beauty even in simple things, such as cauliflowers. He became a cultural icon and inspiration not only for his contemporaries but also for future generations.

Controversial, eccentric, narcissistic, stubborn and extremely creative, Dalí used to say about himself: “Every morning upon awakening, I experience a supreme pleasure: that of being Salvador Dalí, and I ask myself, wonderstruck, what prodigious thing will he do today, this Salvador Dalí.” Inspired by the seventeenth century Spanish painter Diego Velázquez, Dalí grew a characteristic upturned moustache, which became an iconic trademark of his appearance.

Every morning upon awakening, I experience a supreme pleasure: that of being Salvador Dalí, and I ask myself, wonderstruck, what prodigious thing will he do today, this Salvador Dalí

Dalí was born as the son of a public notary on May 11, 1904, in the Catalan town of Figueres. His older brother, also named Salvador, died nine months earlier at the age of three. When Dalí was five, his parents took him to his brother’s grave and told him that he was the deceased Salvador’s reincarnation. Later in his life, Dalí would say that his brother “was probably a first version of [him]self but conceived too much in the absolute.”

Dalí revealed immense artistic talent at a very young age. When he was ten, his parents sent him to a drawing school. He had his first exhibition at the age of fourteen. In 1922, he moved to Madrid where he studied at the Royal Academy of Fine Arts of San Fernando. He was expelled from the Academia after he refused to take exams, claiming that he was more skilled than his examiners.

Dalí revealed immense artistic talent at a very young age. He had his first exhibition at the age of fourteen.

After arriving to Paris in 1926, already heavily influenced by Surrealism, he officially joined the group led by André Breton in 1929. Soon, he gained international fame and recognition, and became one of the most famous representatives of the Surrealist movement.

However, the increasing commercialization of Dalí’s works, and accusations that he was seeking only fame and fortune, as well as emerging differences in the perception of art and the world, led to a clash between him and other Surrealists. André Breton even coined the derogatory nickname “Avida Dollars”, which was an anagram for “Salvador Dalí” and referred to his alleged greed for wealth. Furthermore, some Surrealists spoke of Dalí in the past tense, as if he were already dead. The artist, however, seemed undaunted by the critique and retorted that he himself was, in fact, Surrealism.

The increasing commercialization of Dalí’s works led to a clash between him and other Surrealists. Furthermore, some Surrealists spoke of Dalí in the past tense, as if he were already dead.

In 1929, the artist met the love of his life – his muse, model and inspiration: Gala. They entered into a civil marriage in 1934, followed by a Catholic ceremony fifteen years later. The couple lived in Spain near Cadaques, but the artist often travelled abroad, exhibiting around Europe and in the United States.

During the Second World War Salvador and Gala stayed in New York City, where Dalí’s eccentric nature attracted even more attention than his art. He appeared in television advertisements, which also affected the commercial success of his artwork. He became particularly popular among the American upper class.

In 1948, the couple returned to Europe. In his hometown of Figueres, Dalí founded a museum housed in the town’s theatre. He experimented with various media and incorporated new forms in his works. He developed an interest in natural science and mathematics as well as in metaphysics and optical illusions. In 1968, the artist bought a castle for Gala in Púbol near Figueres. He could not, however, visit his wife there without prior written request and her permission. Gala lived in the castle between 1971 and 1980, receiving her numerous young lovers on its premises.

Dalí’s eccentric nature attracted even more attention than his art. He appeared in television advertisements, which also affected the commercial success of his artwork.

At the beginning of the1980s, Dalí’s health deteriorated. His right hand started to tremble, displaying symptoms of Parkinson’s disease, which made it difficult for him to work. It is said that Gala had dosed the artist with illegally prescribed drugs, which damaged his nervous system and put an end to his artistic capacity. In spite of this, Dalí would always say: “I love Gala better than my mother, better than my father, better than Picasso, and even better than money.” Regardless of the nature of the couple’s relations in their final years, Gala’s death in 1982 stripped Dalí of his will to live. He moved to the castle in Púbol and plunged into apathy. He died seven years later of heart failure while listening to his favorite opera Tristan and Isolde.