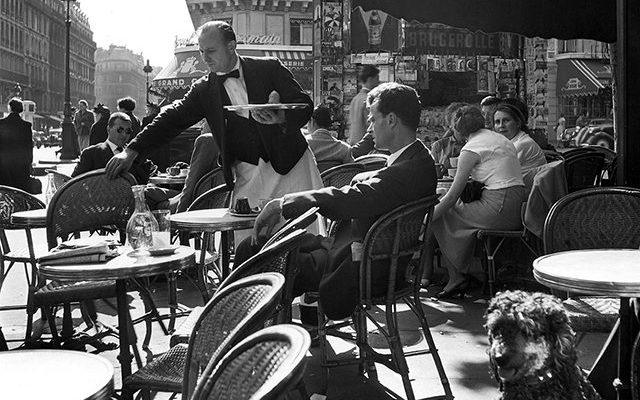 Terrace of Deux Magots, one of the oldest cafés in Paris © East News

The cafés of Paris

There is perhaps nothing more essentially French than spending time in cafés and watching the passersby over a cup of black coffee or a glass of wine. The cafés of Paris are also inseparable from the life of the artistic bohemia. They are where untold numbers of poems and novels were conceived and where many of the most important art manifestos of all time were written. This is where the painters, writers, and poets met to debate, drink and party together. It was also here in Montmartre and Montparnasse where revolutionaries and politicians were gathered together in clouds of cigarette smoke.

During these evenings, wine was poured liberally along with the fashionable absinthe, “the green fairy”. It had a beautiful color, unusual flavor (it was based on wormwood and aniseed), strong alcohol content, and psychoactive properties. It became hugely popular among the Parisian bohemia. To drink it, one needed to carry out a special ritual. Water was dripped into the absinthe through a special teaspoon containing sugar that was held over the glass. At the turn of the 20th century, approximately 30 million liters of absinthe were consumed in France every year. When the drink reached the peak of its popularity, it began to be criticized as dangerous, addictive, and hallucinogenic. In 1915, a ban on its production and sale was introduced in most European countries and the United States. Its production was reintroduced in the 1920s.

At the turn of the 20th century, approximately 30 million liters of absinthe were consumed in France every year. When the drink reached the peak of its popularity, it began to be criticized as dangerous, addictive, and hallucinogenic.

In the time of Louis XV, there were six hundred cafés in Paris, and by the end of the 18th Century, there were nearly eight hundred of them. They appeared everywhere just before the French revolution and served as the central gathering points and incubators of the opposition.

In 1815, the first bistros appeared, thanks in part to unruly Cossacks. Their name derived from the Russian word ‘bystro’, which means ‘quickly’. Impatient Cossacks would often shout this at the bar tenders while waiting for their drinks.

A bistro is a combination of a restaurant with a bar and a café. One could get a quick snack here and eat it by the counter, or have a full meal at a table. The menu wasn’t original – usually listing things like traditional stewed beef (joue de boeuf braise grande-mère), beef kidney stew (rognon de veau entier), pickled pork with lentils (petit salé aux lentilles), or something as simple as egg with mayonnaise (l’œuf mayo) or a platter of cold cuts.

The oldest “café comme il faut” is Le Procope, opened in 1702 by the Sicilian Francesco Procopio dei Coltelli. It was the very first place in Paris to serve coffee. Other cafés were referred to as ‘caverns’, due to their dark interiors and dim lighting. Le Procope was the opposite – brightly lit, sophisticated and luxurious. It became famous thanks to the actors of the nearby Comédie Française, and bowlers who were especially fond of the spot at the back of the café. This is also where Denis Diderot and Jean le Rond d’Alembert met and conceived their L’Encyclopedie ou dictionnaire raisonné des sciences, des arts et des métiers (Encyclopaedia, or a Systematic Dictionary of the Sciences, Arts, and Crafts), the most important and influential work of the Enlightenment.

Le Procope was visited by many famous figures including Voltaire, who would drink coffee with chocolate (as many as fifty cups a day), Jean-Jacques Rousseau, and later the revolutionaries Danton, Marat, and Desmoulins. In the 18th Century, the café was a favorite with chess players including Benjamin Franklin, who, it is claimed, worked on the United States Constitution between games. In the Romantic era, it was a favorite haunt of Alfred de Musset, George Sand, and Honoré de Balzac who proclaimed, “A café’s counter is the people’s parliament.”

In the 18th Century, the café was a favorite with chess players including Benjamin Franklin, who, it is claimed, worked on the United States Constitution between games.

The cafés were also favorites of the “gristtes”, pretty peasant or artisan girls from the countryside, who came to Paris looking for love and money – who often went by trendy nicknames, such as Mimi or Musette.

In the 1880s and 1890s artists gathered in the cafés and cabarets of Montmartre. The most popular among them was the Lapin Agile – a magnet for painters and students, but also for shady underworld types. With time, the cafés in Montmartre gradually became less popular and their customers started moving in the direction of Montparnasse, where the prices were equally reasonable, but the location was much more attractive. In the 1920s Montparnasse’s most popular venues included La Coupole, Le Dome, and La Rotonde. They owed much of their fame to such names as Hemingway, Joyce, Fitzgerald, and Miller. Le Dome was also visited by the Russian revolutionaries Trotsky and Lenin.

Parisian cafés have left an indelible mark in the history of Europe. To this day, they are regarded as a symbol of the city and an essential element of its atmosphere. They continue to attract tourists from the entire world.