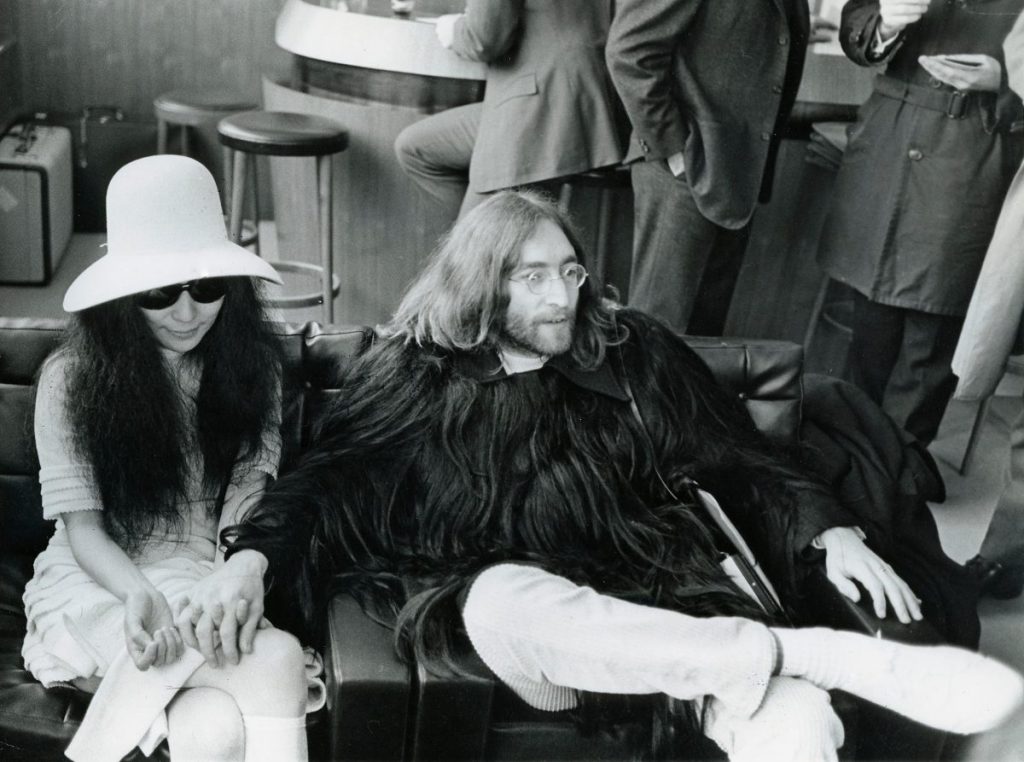 John Lennon and Yoko Ono back in Paris after their wedding, March 1969. © Alamy

John, Yoko, and the Beatles in La Ville-Lumière

John and Yoko arrived in Paris on March 16, 1969. They wanted to get married in “The City of Love”. Initially, the couple planned to enter into marriage on the cross-channel ferry between England and France, but regulations did not allow it. Hence, they chose to fly to the French capital, but once again they were unable to marry there as they had not lived in France long enough to qualify. Finally, they were advised to charter a private plane and go to Gibraltar – a British overseas territory. On March 20, Ono and Lennon took their wedding vows on the Rock of Gibraltar. After the ceremony, they returned to the Plaza Athénée, where they spent their honeymoon.

They wanted to get married in “The City of Love”. Initially, the couple planned to enter into marriage on the cross-channel ferry between England and France, but regulations did not allow it. 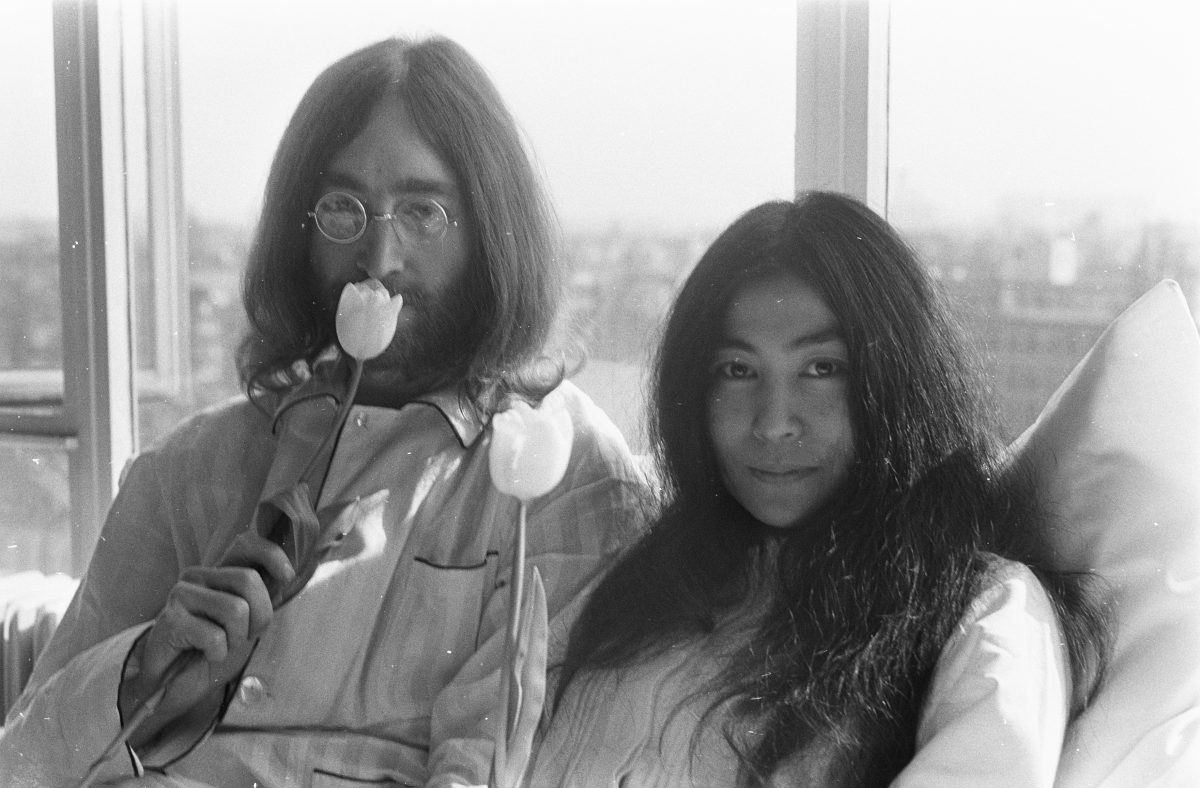 For the Beatles, Paris already in 1964, was the place where a dreams come true. They were playing 18 shows at the Olympia Theatre and were booked to go to America directly after the Paris trip. In the suite at the George V Hotel in Paris, the band learned that the song I Want to Hold Your Hand had topped the American charts.

The hotel was founded in 1928 and set new standards for luxury in the hospitality industry. Located near the Champs Élysées, with terraces overlooking the entire City, it is considered one of the best hotels in Paris.

The Beatles stayed at the hotel during their performances in Paris. John Lennon also chose the place for his belated honeymoon with his first wife – Cynthia. They stayed here from the end of January to the beginning of February 1964. Cynthia felt overawed by the luxury of the hotel while John, on the other hand, kept showering her with presents – designer clothes, accessories and Chanel No. 5. The couple spent time strolling about the city and admiring its architecture.

The Olympia is a music hall founded in 1888 by Joseph Oller, the creator of the Moulin Rouge. It opened as the “Montagnes Russes” and was renamed the Olympia five years later. In addition to concerts, the Olympia hosted a variety of other events, including ballets, circuses, and operettas. However, following a steady decline in the popularity of musical performances, it was converted into a movie theatre in 1929 and remained so until 1944.

In 1954, the Olympia had a grand re-opening as a music hall. At the time it was the biggest music hall in Europe. However, by 1979 the hall was again in decline and in danger of being torn down and turned into a parking lot. Fortunately, at the beginning of 1993, then the Minister of Culture issued a preservation order for the Olympia, which resulted in two years of renovation work that aimed to reclaim the Olympia’s former grandeur by rebuilding its characteristic façade and famous red interior. Today the auditorium is a popular venue and has a capacity of 1700 seats. 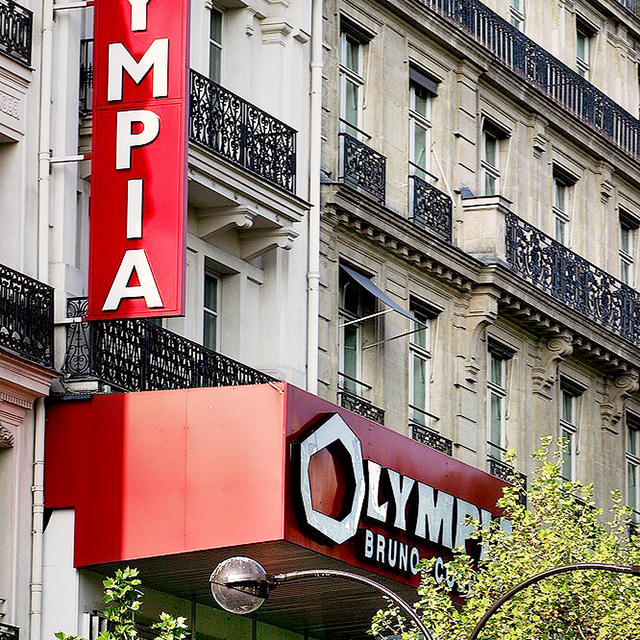 The Olympia was founded in 1888 by the creator of the Moulin Rouge. © EastNews

At the end of January and the beginning of February 1964, the Beatles began their British Invasion with eighteen concerts at the Olympia Theatre. Every day, a mob of French photographers crowded the backstage area in an attempt to capture unique moments from the band’s life. One night, when one of the photographers was disallowed from taking private pictures of the band, a fight broke out. George Harrison almost had his guitar damaged and Paul McCartney was forced to stop singing to call for order. The Paris police were called and the group resolved that for the remaining concerts no one was allowed backstage.

The EMI Pathé Marconi Studios was a recording studio where The Beatles had their first – and only – recording session outside the United Kingdom in January 1964.

After a day spent back in London, Lennon and Harrison returned to France and entered the Studios to record new versions of I Want To Hold Your Hand and She Loves You. That same evening The Beatles performed at the Olympia Theatre.

The Palais des Sports is an indoor sporting arena built in 1960 with a capacity of 4500 seats. Although built for sports, it is praised by many musicians for its great acoustics. Moreover, the glass dome of the arena is considered to be a unique architectural achievement as it is the lightest such structure ever designed in the world.

On June 20, 1965, The Beatles opened their European tour with a concert at the Palais des Sports. The concert was transmitted live by a French radio station and filmed by one of the television channels. A few months later, the performance was shown on TV.

One night, when one of the photographers was disallowed from taking private pictures of the band, a fight broke out. George Harrison almost had his guitar damaged and Paul McCartney was forced to stop singing to call for order.

After the performance at the Palais des Sports in 1965, the members of the band went to the Castel nightclub, where they partied until early hours. At that time, using drugs – particularly marijuana – while partying was not uncommon.

In 1968, John Lennon was arrested for possessing marijuana. According to his ex-wife, Cynthia, he was not partial to stronger drugs. However, John’s mood swings caused by using LSD were believed to be one of the reasons why their marriage ended.

The Hotel Plaza Athénée is a luxury hotel that opened in 1911. The long list of famous guests who have stayed at the Athénée over the years includes: Josephine Baker, Rudolf Valentino, Gary Cooper, Grace Kelly and the spy Mata Hari, who was arrested here.

John Lennon and Yoko Ono checked into the hotel after they arrived to Paris. The events were later recounted in Lennon’s The Ballad Of John And Yoko.

While on their honeymoon, Lennon and Ono had lunch at the hotel with the iconic artist Salvador Dalí. After that, French newspapers wrote at length about the unusual meeting, speculating on the content of their conversation.

See it on Map: 25, avenue Montaigne

The Bourget Airport in Paris witnessed many unique moments in The Beatles life.

There is a picture from January 1964, in which Lennon, McCartney and Harrison are seen signing autographs for an airline officer at Le Bourget.

In yet another picture from 1969, taken by the photographer Daniel Angeli, John and Yoko are captured returning from their wedding ceremony in Gibraltar. They are happy and holding hands walking down the concrete apron of the airport. The picture seems to be a testament to what Lennon once said: “Love is a promise, love is a souvenir, once given never forgotten, never let it disappear”. 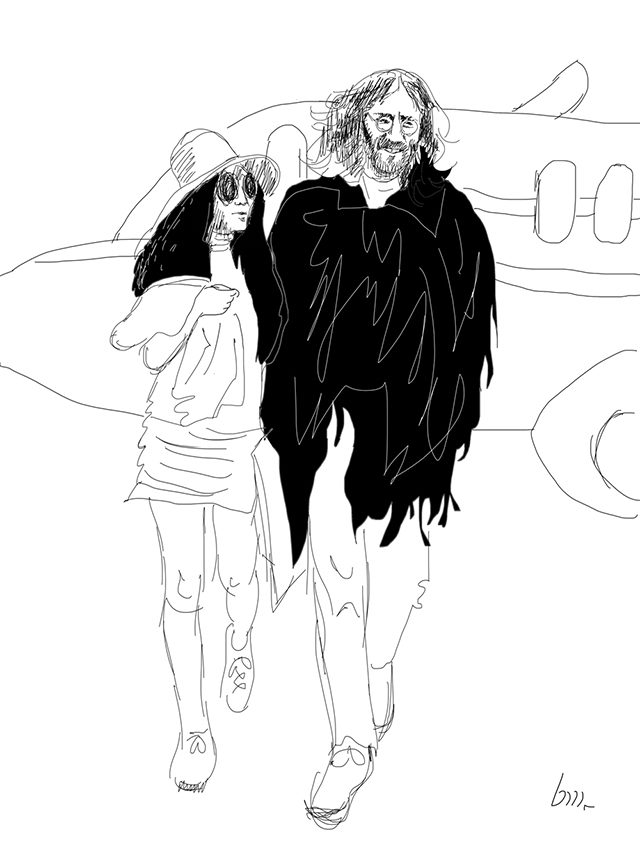