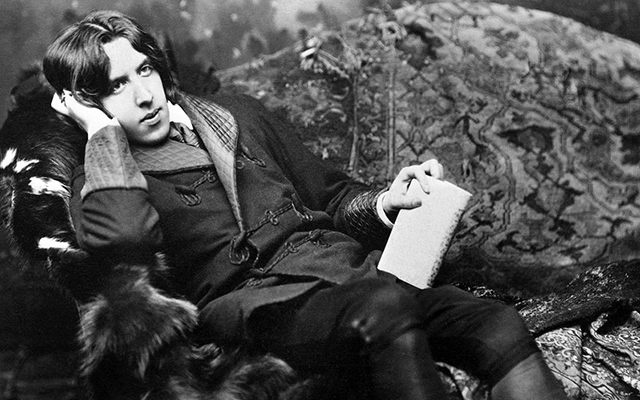 Oscar Wilde: From Dublin to Paris

Oscar Wilde frequently visited Paris: first, in the company of his mother, later as a student, and again in 1883 as a bachelor. In 1884, he again returned to Paris on his honeymoon with his wife. As a married man, the writer often returned to the city after discovering his homosexuality where he engaged in numerous romances and secret sexual encounters with men. Paris was also Wilde’s initial destination after he was released from prison.

Oscar Fingal O’Flahertie Wills Wilde (1854–1900), an Irish writer and poet is best remembered for his novel The Picture of Dorian Gray and his trial and imprisonment for homosexuality.

He was born on October 16, 1854, in Dublin. His father was an eminent surgeon and his mother was a poetess who established a literary salon in Dublin. Oscar Wilde was famous for his brilliant sense of humor and sharp satirical wit. His affected and unorthodox manner, which manifested itself in his long hair and deliberately “effeminate” bearing, made him stand out from the crowd.

After graduating from Oxford, Wilde returned to Dublin, but soon left again for London where he began working as a journalist. In 1882, he travelled to the United States to deliver lectures on estheticism, propagating the idea of art for art’s sake. Originally planned to last two months, Wilde’s stay in America was extended for over a year due to the commercial success of his lectures. After he returned to Great Britain, he married a wealthy Englishwoman, Constance Lloyd, in May 1884. The couple had two sons, Cyril and Vyvyan.

Wilde later became the editor of Lady’s World magazine, which he promptly renamed to The Woman’s World and changed its tone, which contributed to a surge in its popularity. The magazine continued to publish articles on trends and fashion, but also focused on what women thought and felt about the issues of the day.

The Picture of Dorian Grey

In 1891, Oscar Wilde published his famous (and only) novel The Picture of Dorian Gray. It tells the story of a young man, Dorian Gray, who remains ageless and beautiful as time passes, while a painting of him magically depicts him aging into an old man. The portrait not only ages instead of the protagonist, it also serves as a visual representation of his corrupt life and debauchery. The book was not received well by the critics, who denounced it as immoral. In spite of the initial scandal and hostile reviews of the novel, it eventually became a popular classic. However, Wilde’s biggest success and recognition came in the theatre, particularly with his brilliant comedies such as An Ideal Husband, and The Importance of Being Earnest.

The Picture of Dorian Grey was not received well by the critics, who denounced it as immoral. In spite of the initial scandal and hostile reviews of the novel, it eventually became a popular classic.

When Wilde discovered that he was a homosexual, he started to travel to Paris, where he engaged in numerous adulterous affairs with men. Marcel Schwob, a French writer and literary critic, confided his impressions of Wilde in his journal: “A big man, with a large pasty face, red cheeks, an ironic eye, bad and protrusive teeth, a vicious childlike mouth with lips soft with milk ready to suck some more. While he ate – and he ate little – he never stopped smoking opium-tainted Egyptian cigarettes. A terrible absinthe-drinker, through which he got his visions and desires.” Equally critical comments were made by Edmond de Goncourt, who said: “in a man so given to plagiarizing his fellow authors, homosexuality must be a plagiarism from Verlaine.”

One of Wilde’s lovers was Lord Alfred Douglas, also known as ‘Bosie’. In 1895, Alfred’s father, the Marquis of Queensberry learned about the intimate nature of the relationship between his son and the writer and confronted Wilde in public. The writer had the Marquis prosecuted for libel, but he lost in court. Furthermore, in a second trial he was convicted and imprisoned for homosexual liaisons, which were prohibited in Great Britain at that time. Wilde was sentenced to two years of hard labor in Reading Prison (also known as Reading Gaol), located near London. Humiliated, his wife changed her surname to Holland and left England, taking their children with her (Wilde’s sons later assumed their mother’s name).

While in prison, Wilde wrote De Profundis, an epistle to Alfred Douglas, the full text of which was not published until 1949. He also wrote The Ballad of Reading Gaol, a poem commemorating his prison life.

Wilde left England and moved to France. He was in very poor health after his stay in prison, financially ruined, and emotionally devastated.

Upon his release from prison in 1897, Wilde left England and moved to France. He was in very poor health after his stay in prison, financially ruined, and emotionally devastated. He settled in a small town in Normandy, where he assumed the name of Sebastian Melmoth. He decided not to go to Paris until he completed writing a new work. From Normandy he travelled to Italy to see Lord Douglas, whom he still loved. The trip, however, was a major disappointment, since Douglas was only interested in money and the writer had just a little over a hundred pounds. When the money was spent, the relationship was over, and Wilde departed for Paris.

Oscar Wilde died at the age of forty-six. Different opinions are given as to the cause of his death – some say that he died of cerebral meningitis; others claim that he suffered from syphilis or had cancer of the ear. The writer was initially buried in the Cimetière de Bagneux, but later his remains were disinterred and transferred to Père Lachaise Cemetery in Paris. The ashes of Wilde’s last lover, Robert Ross, were laid next to him.