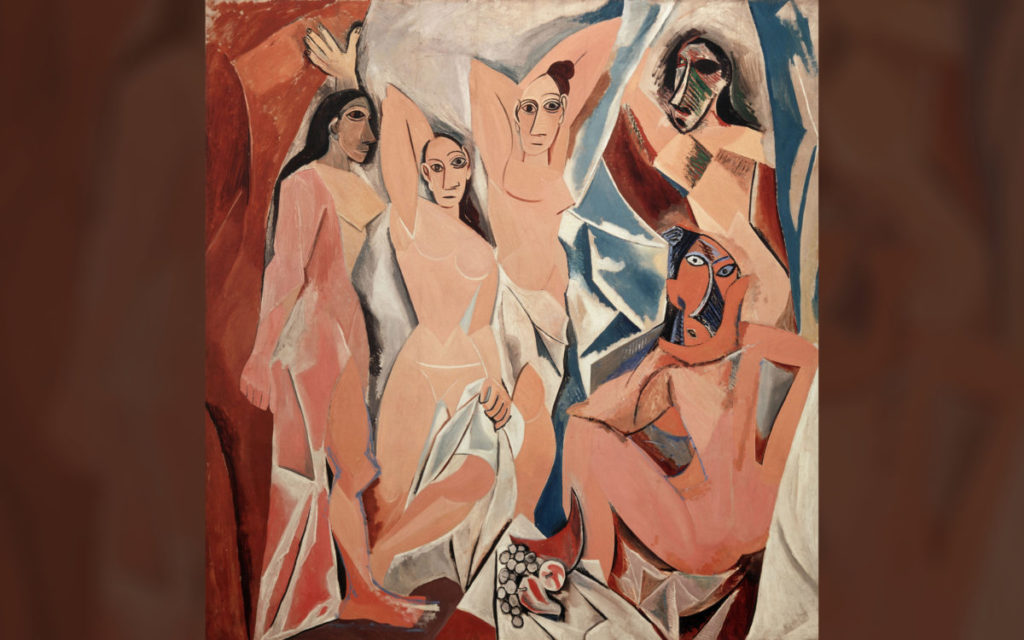 “A veritable cataclysm!” declared Gertrude Stein upon seeing the painting. Henri Matisse could not believe the rawness and hostility of the painting. André Derain decided that Picasso had gone too far. André Breton was the only one who predicted that Les Demoiselles was in fact the beginning of a new era in painting.

Today, it is one of Picasso’s most recognizable works and is considered by critics to be one of the most important paintings of the 20th century.

The painting announced a revolution in art: cubism. It presents five naked prostitutes from a brothel on the Carrer d’Avinyo in Barcelona. Thus the title does not refer to the city of Avignon, but rather to the name of the street in Barcelona. Picasso lived in the neighborhood and often bought paper and watercolors on that street. Initially, the title of the piece was to be Burdell d’Avignon.

Art historians have often tried to identify hidden meanings in Les Demoiselles… For instance, some have claimed that the central figure’s face is actually a self-portrait of Picasso himself.

The then twenty-five year old painter spent six months working on the painting, beginning in the winter 1906/07. None of his earlier canvases had ever been preceded by so many sketches and successive drawings. At first, the painting was intended to show two men surrounded by women – a sailor with a cigarette and a student holding a skull in his hands. The final version features prostitutes, shown without shame and in a formally innovative manner. Picasso doesn’t try to reproduce reality – instead he breaks with perspective, bending lines, and fragmenting and geometrizing the female bodies. Two of the five figures of women are based on African masks that Picasso saw in the Paris Ethnographic Museum. He believed that masks awaken fear and conjure anxiety. They indicate transformation – into an animal, a demon or a god. The public received the painting with astonishment, or even with terror. Such was the painter’s intention – he liked to shock.

Art historians have often tried to identify hidden meanings in Les Demoiselles… For instance, some have claimed that the central figure’s face (with asymmetrical eyes) is actually a self-portrait of Picasso himself.

The painting belongs to the MoMA collection. It is one of the museum’s prized holdings.

Read Also: How did Pablo become Picasso in Paris