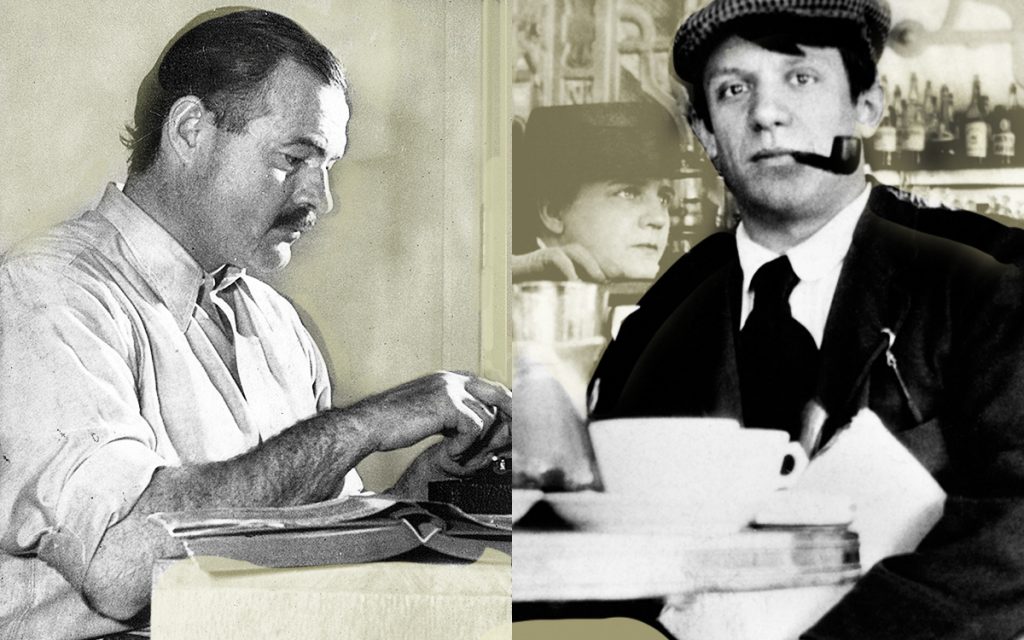 Do you ever wonder what was on those famous artists’ menus back in the day. Were they gourmands? Or was food the last thing on their minds? What was on their plates during the last century?

“He decided to paint it, rather than eat it.”

Pablo Picasso, one of the most influential painters and artists of all time was also recognized and admired during his lifetime. He wasn’t only a great painter, he was also well-known among the elite of Paris. Picasso often visited Gertrude Stein’s apartament. She was famous for her excellent meals and the special dishes that she dedicated to every guest. Picasso had not only lived for love and art. As a well-known playboy, he was mostly interested in devouring women’s hearts! Jacqueline Roque – one of his wives, said in a short interview in Vogue’s food column: „Picasso is as sober and frugal as a goat”. One day she prepared one of painter’s favorite dishes – stew of eels. “He decided to paint it, rather then eat it”.

Picasso often visited Gertrude Stein’s apartament. She was famous for her excellent meals and the special dishes that she dedicated to every guest.

Picasso spent a lot of time in best cafés and bars in Paris. One of most famous was the Closerie des Lillas located in Montparnasse. It was one of the hippest addresses of the 20th Century. Almost every big name in art you can think of has a link to this place. Picasso was introduced to the Closerie des Lillas by Guillaume Apollinaire where he met a whole new circle of people. He would come there almost every day. What did he eat? Did he drink a lot of absinthe? If his painting The Absinthe Drinker is any proof.

Read also: How did Pablo become Picasso in Paris

When we think about drinking in 20th century Paris, we think about the „Lost Generation” and Ernest Hemingway. As a close friend of Gertrude Stein (his mentor and patron) and the Fitzgeralds, he led an active social life (and night life). As with Picasso, the Closerie des Lillas was his second home. He wrote many of his short stories and articles for the Toronto Star there. For his evening escapades with Scott Fitzgerald he would often go to the hotel bar at the Ritz. Harry’s New York Bar was his second favorite haunt. Hemingway, the man’s man, was a true fan of the Mojito. According to the one of the biggest myth, he drank it often at La Bodeguita del Medio, one of his favorite bars in Havana. Did he really preferred fizzy rum and mint, rather than whiskey, straight up?

The Closerie des Lillas was his second home. He wrote many of his short stories and articles for the Toronto Star there. For his evening escapades with Scott Fitzgerald he would often go to the hotel bar at the Ritz. Harry’s New York Bar was his second favorite haunt.

If you would like to eat like Picasso, you can prepare his favorite stew of eels at home.  If you would like to drink like Hemingway we recommend to try Gregorio’s Rx drink, probably served to Hemingway by his skipper, Gregorio Fuentes, while out on his beloved boat, Pilar.
The recipes are below. And the boat is waiting.

Read also: Where did Hemingway live in Paris?

Heat 2 tablespoons of butter and 3 tablespoons of olive oil in a large frying pan, add small white onions and sprinkle them with sugar. When golden on all sides, cover the pan and cook gently, turning onions carefully from time to time. Be sure they are well caramelized without sticking. After 10 minutes add the salt pork cut in cubes; when transparent, put in the mushroom heads, and let simmer.

At the same time: Heat 2 tablespoons of butter and 3 tablespoons of oil in a casserole. Cover the bottom with 2 chopped onions, minced shallots, garlic, and chopped mushroom stems. Put the bouquet garni in the center and the sections of fish around it. Season and cook gently for 5 minutes, then cover with wine. Bring to a boil, then lower flame as far as possible, to simmer, without boiling, for 15 minutes.

Drain the pieces of eel and place in the frying pan with the small onions. Keep warm over a low flame.

Strain the sauce through a fine sieve, return to high flame and reduce, uncovered for 5 minutes. Work 2 tablespoons butter and 1 tablespoon flour into a paste, and add it in bits to thicken sauce; stir to boiling point before removing from stove.

Cover the eel stew with sauce; and serve surrounded by croutons fried in butter.
(Source: Vogue US)

Add all ingredients to cocktail shaker with ice and shake. Strain into a glass filled with ice. Add sparkling water to shaker. Swirl and pour into drink. Garnish with a mint sprig.

Read more about Picasso’s and other artists’ menus